Liquidity is coming back: first year-over-year increase in volume since 2013 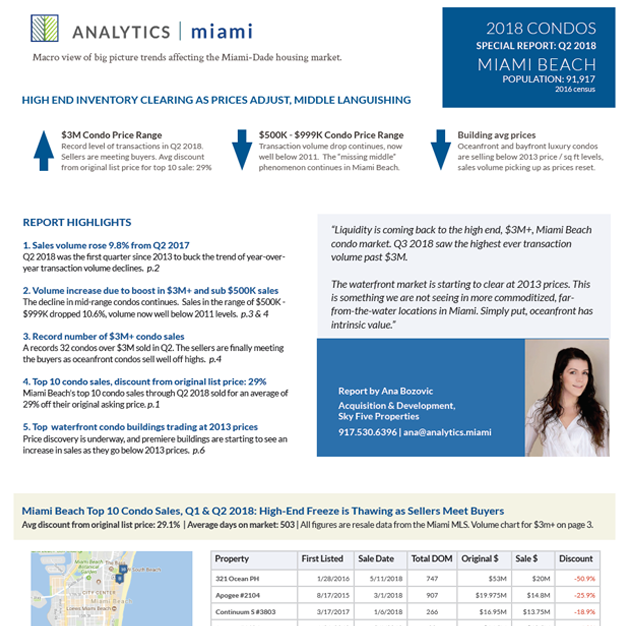 The sales volume decline that began in 2013 appears to have ended in the second quarter of 2018. Higher transaction volume was driven by properties under $500K and over $3M, with the middle ground remaining weak. The second quarter saw a record number of $3M+ condo sales, as high-end properties began to trade at large discounts.

Premiere oceanfront property has intrinsic value, and there will always be buyers at realistic prices - it's now clear that the handful of 2015 and 2016 sales near $3000/sqft did not reflect intrinsic value, but the top of a hype cycle. As for who is buying now, US residents rather than foreign buyers are prominent, such as hedge fund managers moving from high-tax states. Cliff Asness of AQR Capital Management has made the most expensive purchase year-to-date, paying $26M for the penthouse at 321 Ocean. That property sold for 50% off of its original asking price.

The Average Asking Price For A Miami Beach Condo Drops To 2014 Levels As High-End Condos Sell At Steep Discounts.

Luxury, waterfront inventory is starting to clear as prices per square foot dip below 2013. Oceanfront has intrinsic value, and this segment of the luxury market is outperforming mainland locations.

Asking prices for luxury Miami Beach condos are dipping below 2013 levels.
Sales volume is starting to pick up as the market resets.