Miami Condo Inventory Is At All Time Highs:

All data from the Miami MLS. Rate of sales determined by a six month trailing volume average. Data does not include pre-construction inventory or pre-construction sales (except for the few that have been entered in the MLS). Data is through Dec 31st, 2017.

Purpose of special report & what this all means:

Months of condo inventory in Miami-Dade is at all time highs. At price points past $325K, months of inventory far exceeds the build during the previous market correction. At $1M+, citywide there is almost twice as much inventory as in 2010. The inventory buildup is not spread evenly; some neighborhoods have more than twice as much inventory as in 2010. Various neighborhoods are also seeing 100+ months of inventory starting at $1M asking prices. We know what happened to condo prices in Miami in the last cycle when there was a lesser inventory buildup. This is a market to closely watch.

At this time, there are almost twice as many months of inventory citywide as there were during the last market crash. Last time, it took prices 50% lower than where we are today to clear half as much inventory as we have today. Either a giant new wave of buyers finds an appetite at today's high prices, or prices will have to fall to bring in new buyers. Which seems more likely? 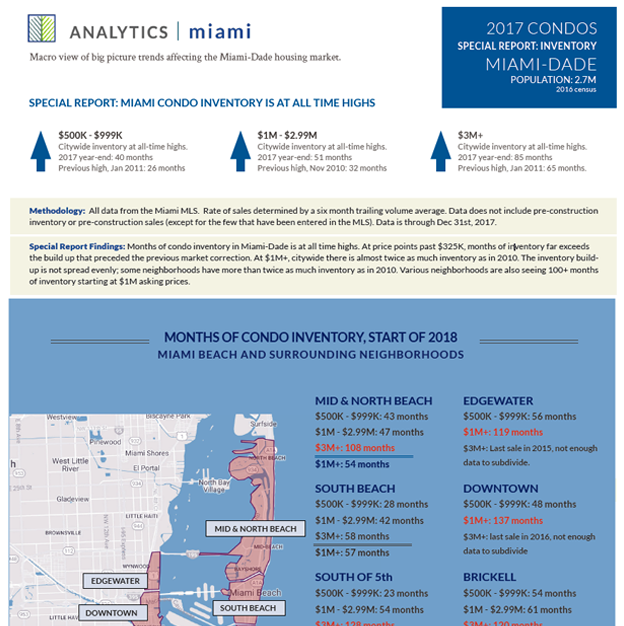 Miami is a divided market

Markets that depend on buyers from outside the area continue to suffer, while local buyers are still plentiful.

The condo market slowdown starts at about $325K. Price points below $325K are supported by local demand and transaction volume is at all-time highs. Local condo demand starts to wane significantly at prices lower than even $500K. At $500K we start to see a significant drop-off in transaction volume. Past $1M the lack of outside buyers is a major factor and there is currently 50 months of inventory.

We have just begun to see price reductions in the Miami condo market.

There is a steady increase in the discount rate and an unrelenting climb in active listings.

I have one of the largest private databases on Miami hotel transactions.

Hello Ana.
I’m guessing you probably know who I am. If not, Google Jack McCabe real estate.
I just wanted to say hello, and that it might be a good idea for us to meet.

You funny Jack.LOL , what kind of comment is this man? Who are you , the president of Miami or something. Put your ass down and congrats the Anas hard work instead of showing of!!

Just saw this. I invite the young lady to meet as I’m impressed with her research and computer skills, and you find something negative about that?

Very impressive and thorough analysis. However, you failed to discuss one market segment : $325K to $500K. Please add me to your mailing list.

With thanks! Very good information!

0
Copyright 2021 ANALYTICS.Miami - All Rights Reserved
Back To Top wpDiscuz